Sky will be the second offering from “…and also with you”

JULY 2022
EV Gallery 621 East 11th Street New York, NY 10009 Stream is an installation at EV Gallery, New York, by artists Miah Artola and Chris Jordan. Two wall-size projections merge, representing the inner and outer conditions of refugees’ experience of fleeing. Stream takes as its point of departure the journeys of three women from Honduras to Mexico, the first step in their quests for asylum. 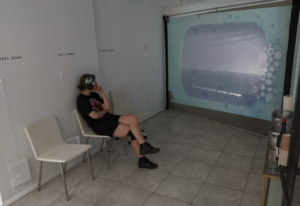 wed women at a refugee shelter in Mexico City for her upcoming web-series SKY.  Through a series of animated charcoal drawings, stop motion paintings, and her films of  traveling through the mangroves and mountains of Mexico, she tells three of these women’s stories. Subtitles and headphones provided.  There is also an ambient soundscape of Mexican forests at night.

Three chairs are offered for visitors to sit on. Each chair is named for each one of these women and offers the person sitting in the chair the opportunity to read her story, which is provided next to them. 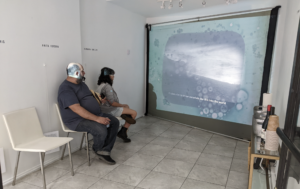 Projection Two: Framing this is an assemblage of tubes and pumps, representing facts of immigrants lives physically through the movement of water. Chris Jordan has created a machine that creates projections and acts as an intersection of resources emblematic of the water they need. It describes the simple vital fact of the necessity for water we all are made of, and that sustains us. These projections will pause every 78 seconds to stop and consider the fact that as of July 2022, 1 in every 78 people is displaced.Stream is an exercise that detours from the politics of refugee law, suggesting the one and only guiding principle is our shared humanity. 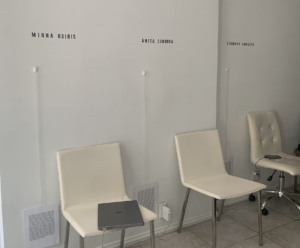 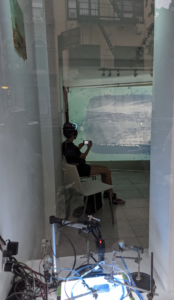 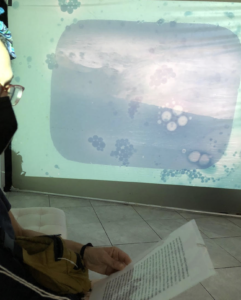 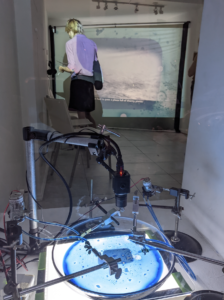 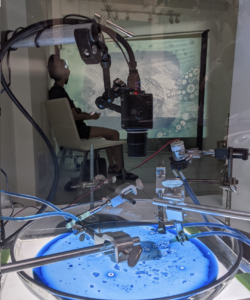 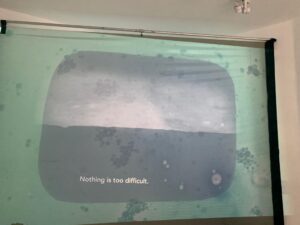 Stream creates opportunities for multifaceted encounters with artworks, highlighting the fundamental necessities of survival, water and compassion. The ways in which the works confront various political, economic, and environmental issues encourage, through the experiential perception of the plight of three women, new modes of addressing this ongoing crisis. The gallery space functions as a political device, proposing a diagrammatic relationship between artist, landscape, and viewer. In this model, diverse forms of engagement can be established in relation to the use of materials, space, and the exigencies of our time.